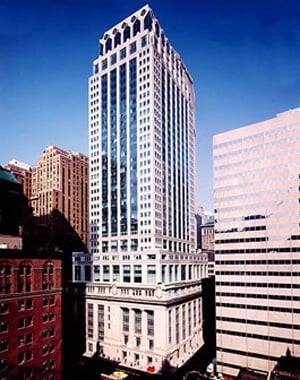 When 450 Lexington Ave in New York City had issues with its existing triplex domestic water booster system, Joe Petro, a top engineer at Concessi Engineers, was called in to examine the system. Joe looked at the system which had three horizontal multistage constant speed pumps from a well known competitor. After assessing the situation, Joe called in Callaghan Pump and Controls recognizing that its variable speed pumps that we represent would be a viable solution to the existing problem. The problem with the previous booster system was that it either ran at full speed or was off. When the building’s water demand was very low, the pumps had a ten minute minimum run timer, which boiled the water, causing premature failure of the mechanical seals. To make matters worse, the pumps had a minimum flow requirement of 20 gallons per minute. Both of these issues were handled with a “bandaid” known as a solenoid valve which dumped water to a drain wasting water and the pump’s energy. The solution was to replace the system with higher efficiency pumps and variable speed drives controlling premium efficient motors.

Callaghan Pump and Controls supplied the pumps to replace the old system with a triplex equal split 150 hp triplex variable speed system similar to our Quantumflo VMS system. With the help of Eamon Devlin of Kinturk Contracting, the system was moved into place in under 4 hours and Par Plumbing piped out the system Its compact design allowed the system to be installed behind the existing system in a space of 36″ x 72″. When startup and testing was complete the old 72″ x 121″ system was removed and discarded. Not only did the owner pick up valuable NYC real estate in the mechanical room, but hearing protection was no longer necessary as the old system sounded like a jet airplane running and the new system with vfd’s sounded more like an electric car. The unexpected surprise benefit of the system was a reduction to the electric bill of $2,470.00 a month. As it turns out, the owner gained all around: more space, less noise , and less expenditures.